How the Textbooks on Reserve Project works.

Where do I borrow textbooks for two hours?

The USM Libraries and the Student Government have purchased many, but not all, textbooks for the Textbooks on Reserve project. We encourage you to check to see if we have your textbook(s) on reserve in one of our campus Libraries for you to use in the Library.

Borrowing a textbook on Reserve

How do I buy textbooks at USM?

If your textbook is not in the Textbooks on Reserve project or you want to purchase your textbook, you should: 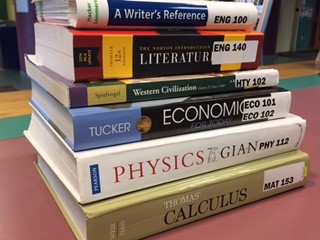 USM Libraries have textbooks for MANY (but not all) courses.
Typically textbooks will be in the Library of the campus where the course is taught.

Keeping textbook cost as low as possible is a goal for USM Libraries. When faculty use OER's, students access textbooks at no cost.

With the increasing cost of textbooks for students, the USM Student Government, Libraries, and Provost discussed creating a pilot program for students to borrow introductory textbooks at no cost.

In the Fall of 2016, the pilot project focused on the core 100 level courses. The textbooks for these courses were placed on Reserve in the Libraries. The books were placed at the campus Library (Portland, Gorham, or Lewiston) where the course was taught most often. Due to the large number of books being purchased, it was not possible to have the reserve books for a course on more than one campus. If the book was available as an e-book, it was made accessible as an e-book.